The Steamer Ontario was built at Chatham, Ontario in 1874 by Simpson and Chisholm. Built for passenger service with the Northwest Transportation company, her run was Sarnia, Fort William, Duluth and back. The wooden passenger/freight steamer was 181′ x 35′ x l2’· with a gross tonnage of 133 tons. She was rebuilt as a 723 gross ton bulk carrier the year before her final demise on the rocks in the shallows just off the eastern end of Battle Island at around 5 AM  on  August 10, 1899. 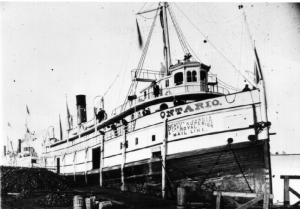 While enroute to Nipigon with a load of coal, travelling in a dense summer fog and lacking the benefit of today’s navigational aids, the old wooden steamer Ontario ran aground on Battle Island.  Luckily, the crew was able to leap from the wrecked steamer onto the rocks at the east tip of Battle Island.  Members of the crew, while in search of firewood, noticed a light and walked toward it.  There search led them to Battle Island lighthouse where they walked in unannounced and startled the lighthouse crew.  The vessel was eventually pounded by the elements and lies in ten to forty feet of water. 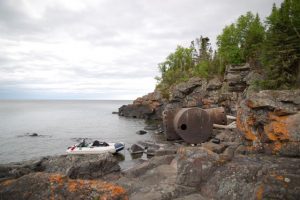 Today the Ontario is what would be described as a “debris field” spread over a large area. One of her boilers sits on shore, the other is close in 10′ of water. The boiler is an excellent landmark to find the wreck.

In 1984 and 1985 a unique project took place on the wreck site.  Local divers, along with the Provincial Marine Heritage Unit from Ottawa, surveyed the wreck with the intent of establishing one of the first underwater interpretive trails in Canada. Unfortunately all records of the project and interpretive trail seem to have been lost although there are still a few plastic plates that can be seen on some of the debris.

The wreckage field is very disarticulated and a diver visiting the site is often mystified as to what parts of the ship they are seeing. The site is not commonly dived and usually only as a second dive. While it is a shallow dive the water can be quite cold and weather unpredictable.